It has been called a ‘silent killer’: Peripheral Artery Disease (PAD), a condition that affects more than 200 million people worldwid [1] yet often goes undiagnosed and untreated until it’s too late - resulting in lower limb amputation or even death.

But today, the outcome for the patient need not be so dire. With the latest innovations in image-guided therapy, we now have much better options for treating PAD, pre-empting the need for amputation. And what’s even more encouraging: new measures are becoming available to assess the effect of treatment instantly in every patient.

When limbs don’t get the blood they need

What is PAD and what makes it such a treacherous condition?

PAD develops when plaque builds up in arteries and reduces blood flow to the limbs, most commonly the legs. Initially, however, many people affected by PAD have mild or no symptoms, or their symptoms, such as leg pain while walking, may be mistaken for something else.

Left untreated, PAD can result in critical limb ischemia, the most severe form of the disease. Pain becomes permanent, non-healing wounds occur, and tissue may die due to lack of blood supply.

Tragically, 34% of patients with critical limb ischemia undergo amputation within one year of diagnosis - often before their leg arteries have been examined with angiographic imaging. One in five patients die within that same time period [2]. These numbers seem to paint a bleak picture for people with PAD. But over the last decade, thanks to innovations in image-guided therapy, much more effective treatment options have become available, allowing clinicians to restore blood flow and prevent the disease from progressing.

Imagine you are able to navigate a catheter through the blood vessels of the leg, unblock the narrowed artery, and then instantly verify whether blood flow has been restored.

That’s precisely what the latest innovations in image-guided therapy are making possible - and why I believe it’s such an exciting time to be in this field. We are now able to help clinicians decide on the right therapy, guide them towards a lesion, treat it, and confirm treatment success - all in a minimally invasive way. This can make a real difference to people with debilitating diseases such as PAD.

Let’s have a closer look to see how this works.

Visualizing blood vessels from the inside out

When you are treating a patient with PAD, the first challenge is to decide which blood vessels to target. This is typically done by injecting a contrast medium into the bloodstream. Using advanced digital imaging systems, the blood supply to the leg or another part of the body can then be visualized.

But what if you could actually look inside the arteries?

With catheter-based imaging technology known as Intravascular Ultrasound (IVUS), clinicians can do exactly that. Cross-sectional images help assess the presence and extent of disease, which can influence decisions on optimal treatment strategy. One recent study showed that in patients where this technology was used, the recurrence of narrowing in blood vessels after twelve months was significantly reduced, indicating that clinicians were able to treat with more precision [3]. Intravascular Ultrasound (IVUS) visualizes blood vessels from the inside out, revealing the presence and extent of disease.

A GPS for navigating the human bloodstream

Once you have decided on treatment, the next challenge is to guide the catheter to precisely the right spot. You want to know for sure that you are in the right blood vessel, that the catheter doesn’t perforate the artery walls, and that no more contrast medium than needed is used for these often vulnerable patients.

With the latest image-guided navigation technology, we can now take pre-operative CT and MR scans and overlay them on an X-ray image to create a 3D roadmap that guides the position of the catheter in real time. Think of it as a GPS for navigating the human bloodstream.

Reusing existing CT and MR scans may not only speed up procedures. It also reduces the need to use contrast medium for additional imaging, limiting the burden on the patient.

Assessing the effect of treatment - instantly

To treat the patient and restore blood flow to the affected limb, different methods can be used. One method is atherectomy, where plaque is removed from the artery via mechanical cutting or laser catheters. Another method uses a drug-coated balloon that is inserted and inflated to open the vessel and treat the plaque, after which the balloon is removed from the body.

Whatever the method used, the clinician will be left with one critical question at the end of the procedure: have I done enough?

Previously, clinicians may have had to wait for months to see if healing had taken place in the affected limb. Today, a real-time X-ray imaging technology called SmartPerfusion is able to visualize the rate at which blood is delivered to a region of interest (known as ‘blood perfusion’), helping clinicians to confirm the effect and completeness of treatment by comparing pre- and post-treatment images. 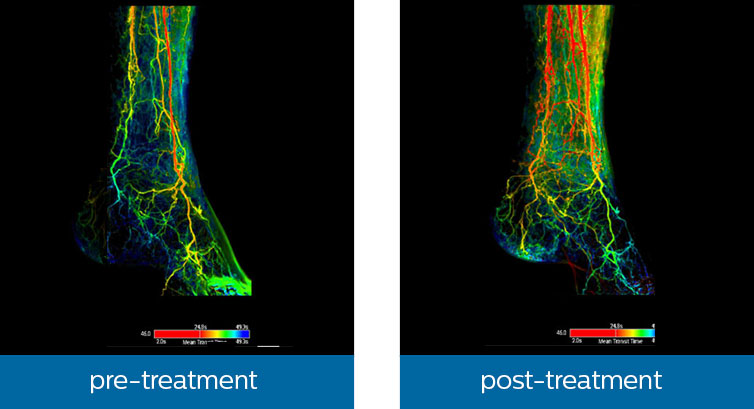 With Philips SmartPerfusion, clinicians can compare the flow of contrast in blood vessels in a region of interest pre- and post-treatment.

Having this kind of knowledge may enable clinicians to determine whether they have done enough, or whether additional treatment is needed. The last thing you want is for a patient to return to the hospital a month later in a worsened condition with no options left, other than amputation - when that outcome could potentially have been prevented.

Taking this strand of innovation one step further, I envision a future in which clinicians will have much more standardized measures to get instant and objective feedback on treatment success. Using artificial intelligence and predictive modelling, those measures could help to forecast patient outcomes and adjust care plans accordingly. All in an open and informed dialogue with the patient. The result: patient care that is both highly personalized and cost-effective.

The possibilities for treating patients with PAD demonstrate how far image-guided therapy has progressed in the past decade. And as we have seen, it’s not just one single imaging technology or one single bit of software that has revolutionized image-guided procedures. Rather, it is the combination of these technological advances.

Now, more than ever, I believe that the real value of solutions in image-guided therapy lies in integrating the latest imaging systems, smart devices, disease-specific software, and services - along the entire procedure. From start to finish. That is what ultimately allows image-guided therapy to deliver on the Quadruple Aim of improved patient outcomes at lower cost, with improved patient and staff experience.

For people affected by PAD, it may well make the difference between losing a foot with risk of complications or even death, and being able to walk without pain again.